more and more about how important gut health is for our overall health. And this is awesome, because this information is surely key to be aware of for many significant reasons.

The “gut” primarily refers to all of the components comprised within the gastrointestinal tract.

This primarily includes the:

All of these areas of the body play key roles in not only the digestive process, but also the immune system, nervous system, and more.

The “microbiome” refers to the collection of bacteria/flora and other microorganisms, both “good” and “bad,” that are found within the gut. Maintaining balance amongst these microorganisms is a huge part of maintaining gut health overall.

“Good” bacteria are also called probiotics. Probiotics include bacteria and some forms of yeast that play important roles in our body.

These roles include helping to break down and digest food, kill pathogenic (illness causing) organisms, and producing vitamins.

2 main genera of probiotics include lactobacillus and bifidobacterium and there are more than 500 species of probiotic bacteria.

“Bad” bacteria refers to any kind of bacteria that can produce illness or imbalance when present in large quantities. These include species such as e. coli, staphylococcus, and clostridium perfringens.

The key factor here is balance.

As long as there are plenty of good probiotic bacteria in our gut, they keep the bad bacterial species at bay and small amounts of these types of bacteria can be present without issue.

However, as soon as the scales begin to tip further in favor of the pathogenic bacteria, symptoms and illness can arise.

Why Is the Gut Considered an Epicenter of the Body?

The most obvious role that the gut plays in maintaining our health is digestion.

The gastrointestinal tract is responsible for breaking down the food that you eat so that the nutrients can be absorbed into the bloodstream and delivered throughout the body to serve their various purposes.

Optimal digestion is key so that vitamins, minerals, amino acids, and nutrients can be absorbed and assimilated properly and henceforth be effectively utilized by the many organs and systems that depend on them to function well.

It can come as a surprise to some that the majority of our immune system is indeed found in the gut.

Cells in the gut lining produce antibodies that help to identify and eliminate various forms of pathogens, or illness causing organisms.

Furthermore, probiotic bacteria themselves help to fend off pathogens and weaken their effect on the body.

Hydrochloric acid, which is acid produced in the stomach when food is eaten, is also used to neutralize ingested pathogens.

Another rather surprising fact is that an entire nervous system in our body resides along the entirety of the gastrointestinal tract. This is the enteric nervous system.

If you’ve ever heard of the gut referred to as the “second brain,” this is why.

Serotonin has many functions including stabilizing mood, regulating sleep, appetite, promoting a sense of well-being, and more.

It is connected to the brain via the vagus nerve and what is referred to as the Gut Brain Axis.

This nervous system also regulates blood flow in the gut, helps maintain bowel motility (which is the rate at which stool moves through the intestines), and synthesizes other neurotransmitters such as dopamine.

One of the main exit pathways in the body is through the liver, bile, small intestines, large intestines, and then out via stool. This is how a great deal of toxins, excess hormones (especially estrogen), etc are eliminated.

A properly functioning gut is required for this pathway to work effectively.

When there is gut imbalance present, this pathway can become blocked or compromised, leading to a reabsorption and recirculation of toxins and excess hormones throughout the body.

Furthermore, there are bacteria in the gut called estrobolomes, which help to metabolize the hormone estrogen, therefore aiding in maintaining sex hormone balance.

There are many factors that can lead to gut imbalance including high sugar diets, overuse of antibiotics (which kill off both good and bad bacteria in the gut), chronic stress, and more.

The following are some of the most common forms of imbalance and illness that can arise in the gut:

“Leaky gut” refers to a state where the lining of the intestines becomes permeable and contents of the gastrointestinal tract such as undigested food particles are able to leak into the blood stream and throughout the rest of the body, causing systemic inflammation and other imbalances.

Your gut lining is usually only semi-permeable, with tight junctions that only allow certain small substances through like the nutrients from your food. If the gut becomes irritated enough, these junctions will widen, causing substances that are meant to remain in your intestines to leak into your bloodstream.

Much more on leaky gut can be found here.

Often referred to as “SIBO,” Small Intestinal Bacterial Overgrowth is when there is an overgrowth of bacteria in the small intestine that don’t usually reside there.

This can happen in different ways, but can commonly involve bacteria that are supposed to only reside in the large intestine/colon leaking into the small intestine via the illeocecal valve.

SIBO can cause many symptoms as described below.

Fungal overgrowth, or candida infection can occur when a pathogenic form of fungus/yeast, called candida albicans, overgrows. This is also sometimes referred to as “candidiasis.”

Candida is usually present in areas such as the mouth and gut, but is kept at bay when there is enough probiotic bacteria present, so it doesn’t usually cause any issues.

For much more on candida fungal overgrowth, including steps to address for healing, click here.

Parasites are organisms that live in a “host” and feed off of the nutrients intended for the host. For humans, this means organisms that are found in the intestines and other areas of the body such as the liver.

Parasites are not only found in developing countries, they are found all over the world, including in developed countries.

There are many different species of parasites, some large, some small/microscopic.

Not only can parasites contribute to nutritional deficiencies, but they can also contribute to a leaky gut by irritating the gut lining.

Parasites can be acquired from various sources including contaminated water, animals, sushi, and under cooked meats.

For much more on intestinal parasites, including steps to address for healing, click here.

I’ve personally experienced leaky gut, fungal overgrowth, and parasitic infection. A multifactorial healing approach was necessary to address these imbalances. One of the most important factors for me was adopting a gut healing diet, which is explained further below.

Symptoms of all of the 4 main types of gut imbalance as described above are all very similar in nature.

These symptoms can include:

Foods that Nourish and Balance the Gut

There are specific foods that help nourish the gut and keep it balanced which we will explore here.

Live “good” bacteria as explained above can be found in various foods products such as sauerkraut (lacto-fermented cabbage and other vegetables), kimchi, yogurt, and kefir.

When eaten, these foods help to populate the gut with probiotics so including them in your diet is excellent for gut health.

Probiotic foods contain a diverse range of probiotic species which is beneficial in promoting mircobiome diversity.

It is important to consume probiotic foods cold or at room temperature and not to heat them, as this will kill off the live beneficial bacteria.

Also, it is important to note that many probiotic foods such as sauerkraut and kimchi are high in histamine, which some people are sensitive to. If this is the case, a probiotic supplement may be better tolerated.

The best probiotic supplements I’ve ever used can be found here.

The term “prebiotic” refers to certain carbohydrates, fiber, and other nutrients that serve as food for good bacteria. These foods help to encourage strong populations of good bacteria, which henceforth promotes a healthy gut environment and allows probiotic colonies to flourish.

Furthermore, eating plenty of prebiotic foods helps the good bacteria in your gut to produce short chain fatty acids. These are produced when probiotics ferment fiber in the colon. They provide energy for the cells in the gut, help with carbohydrate and fat metabolism, and encourage a healthy gut environment overall, among other roles.

Bone broth (from beef, chicken, or turkey bones) can help to sooth the gut and reduce inflammation.

It also contains high levels of collagen, which is a protein that is used throughout the body in connective tissues such as the skin, muscles, tendons, and the gut lining.

Collagen helps to “heal and seal” the gut lining, which helps with leaky gut/intestinal permeability as described above.

As another important note, foods that are super high in collagen 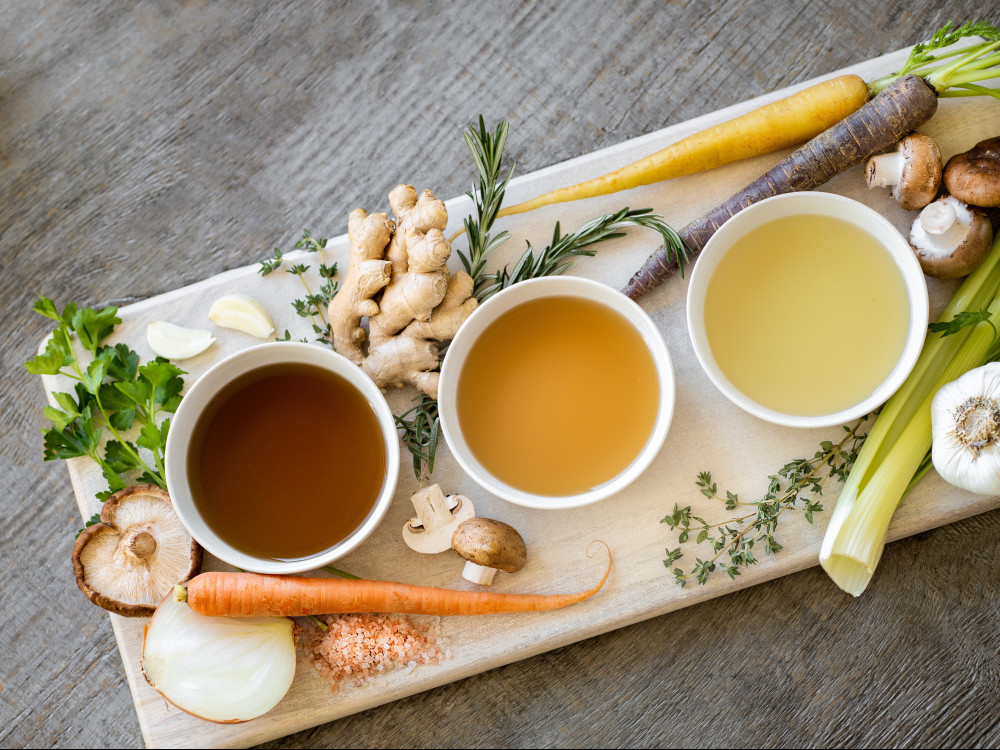 such as bone broth are also very high in histamine. If one has a histamine sensitivity, bone broth will have to be avoided in place of other gut nourishing foods.

Raw “acv” as it’s often referred to, also has antioxidant properties and can help to balance blood sugar.

It can also help to support digestion.

My favorite is Bragg’s. I just put a little bit in water and drink it shortly before some meals.

Fresh vegetable juices provide a wide variety of beneficial nutrients and can also be soothing to the gut, as they help to reduce inflammation and promote a healthy environment in the gastrointestinal tract.

Good quality green juice powders can also be helpful as a quick and easy alternative. These products are also beneficial and soothing to the gut. Click here to check out my favorites.

Drinking enough water is required to ensure that food is digested properly and that stool can move through the intestines smoothly.

Furthermore, dehydration or not drinking enough water can reduce probiotic populations in the gut as well.

mineral profile and is very hydrating.

The amount of water to drink per day varies per person. In general, between 2 to 3 liters of water a day is good.

It is best to drink water and other liquids mostly in between meals. This is because drinking large amounts of liquids with food can dilute hydrochloric acid (stomach acid) production and digestive enzyme production, both of which are very important for breaking down and digesting your food.

I find that using something like a Hydroflask is really helpful and convenient. These are stainless steel water bottles that come in a variety of different sizes. Mine is 40 ounces so I fill it once in the morning and then once again in the afternoon and it takes care of my water consumption for the day.

I also like to make pitchers of water to keep in the refrigerator and I add various ingredients for flavor such as lemon, lime, fresh muddled mint leaves, and fresh ginger root.

An important note: tap and well water can contain a wide variety of contaminants that have an adverse impact on your health so it is very important to filter your water.

Click here to check out my top recommendation for an affordable, portable water filter system that removes over 99.99% of over 200 water contaminants.

Sugar feeds the pathogenic bacteria, fungus, and parasites in the gut and encourages these organisms to flourish and overgrow.

Reducing sugar intake is a key part of healing the gut and encouraging a healthy gut environment.

Processed foods can often include synthetic preservatives and other ingredients that can encourage an imbalanced gut environment by encouraging the proliferation of “bad” bacteria over “good” bacteria.

It is important to limit such foods and focus more on whole foods overall as a way of nourishing not only your gut, but your body overall.

As we’ve explored here, gut health is an extremely important part of our overall wellness.

Including a wide variety of whole foods that help to nourish and balance the gut is a key factor in achieving and maintaining optimal health.

By clicking above, you give your consent for us to send ongoing communications and agree to the terms of our privacy policy. You may unsubscribe at any time.